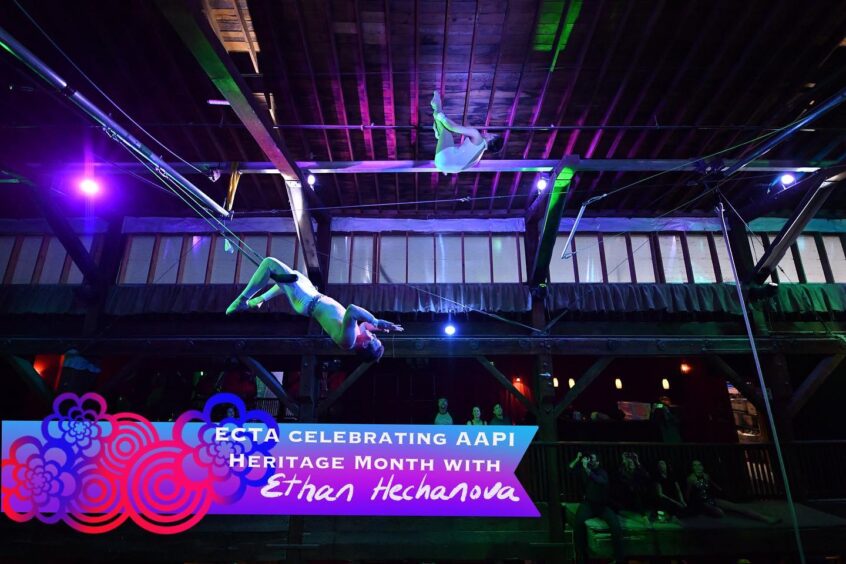 Emerald City Trapeze Arts is excited to celebrate AAPI Heritage Month by giving a platform to its coaches and artists, past and present, to share their stories.

Áo Dài: a traditional Vietnamese national garment
Breaking from the model minority myth has always been hard for me. Partly because of my families’ expectations of my brothers and me and partly because I’d not seen many examples of Asian Americans pursuing the arts, much less circus arts. However, I’ve felt nothing but support from the team here at Emerald City. I think back to my experience with our show, Dances in the Sky. Our costume direction for the show was simply “formalwear.” I saw an opportunity to represent my upbringing and wear an Áo Dài, a style of Vietnamese formalwear that I hadn’t worn since I was a child. While the initiative was there, I had some hesitation. Growing up I had always known to not take up space, to blend in, to be as “American” as possible so the thought of presenting this costume idea was perturbing. But all this worry was for naught. The team loved the idea and I flew my first professional fly show in an Áo Dài, being true to who I am in my art, a cathartic embrace of my past in my present 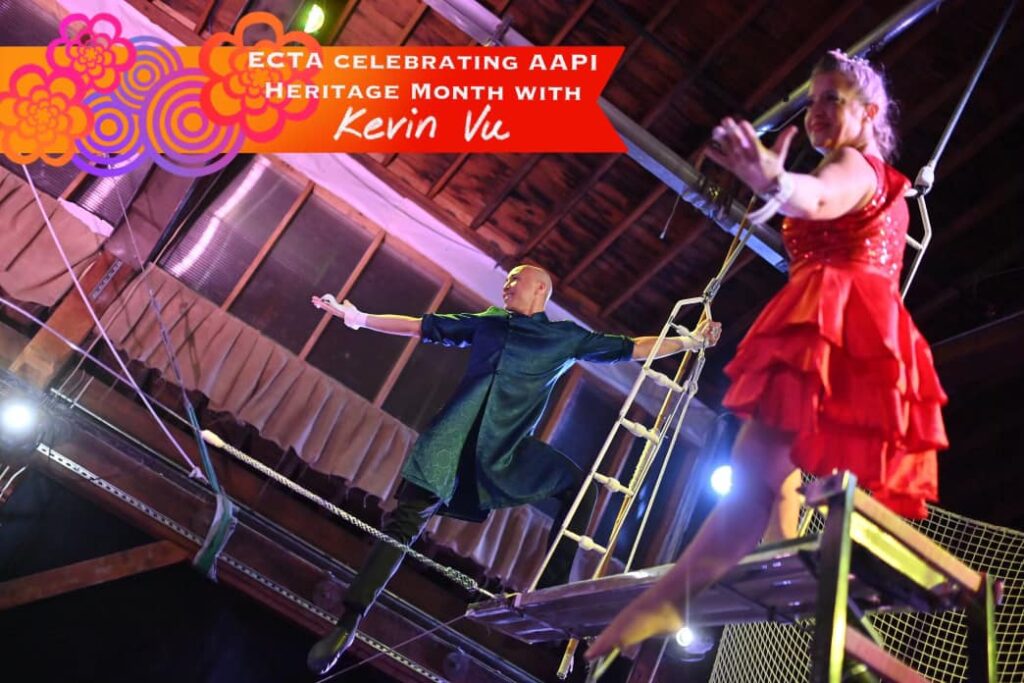 Occupation: Circus performer/Flying trapeze artist
That is not a real thing, that was my thought when I was young. Yet here I am, one of the very few Japanese flying trapeze artists!
I was born in Japan to a 100% non-circus Japanese family and grew up there the same as most kids do. Never thought I would be able to communicate in different languages other than Japanese nor working overseas, especially as a circus performer. My circus journey began in 2006 when I tried for the first time flying trapeze. Since then, I have been involved in so many circus schools, communities, and shows. My experiences at Emerald City Trapeze Arts (ECTA) was definitely one of the most important times to create what I am now, it was the first overseas circus school for me and I was the first Japanese to be at ECTA. The original founder Garry Kirkland welcomed me as family and gave me the best place to be even though my English was not as good as it should be. I have learned a lot there, met wonderful circus people and developed lots of skills with great circus mates. In fact, as many flying trapeze people know, my signature “piked hocks salto” was caught for the first time in that building and that kinda made it popular!  Since then I have traveled to multiple countries and circuses to perform what I love and this would not have happened without my time in ECTA. To be a Japanese flying trapeze artist is very rare and sometimes not easy, but I will continue my journey as long as I can and hopefully, the world will have more Japanese flying trapeze artists! 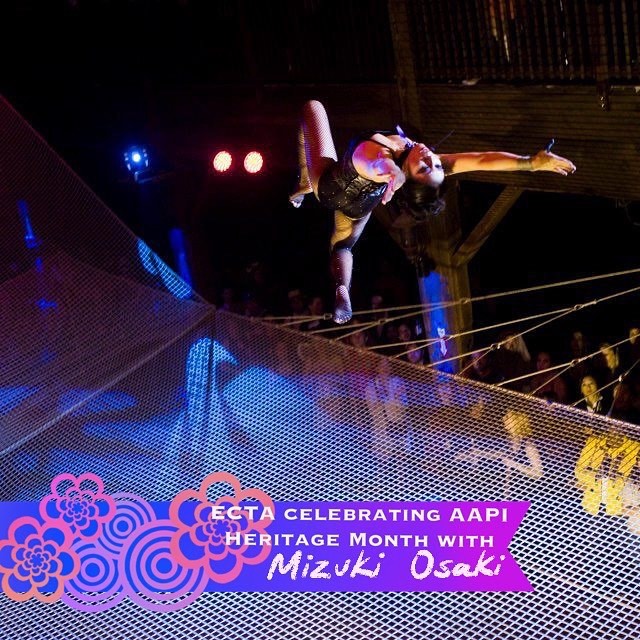 I used to live in Georgia- South Georgia. One day, I stopped to get some gas and a boy came up and asked me if I was real. He had never seen an Asian person in his life. I said I was real and he shyly poked my leg, smiled, and ran away. I am real. I am unique enough to give the boy the smile. Being an athlete and a performer, allows me to stay real and unique. That is why I am still in circus shenanigans with y’all! Photography by @runshine_n_sainbows 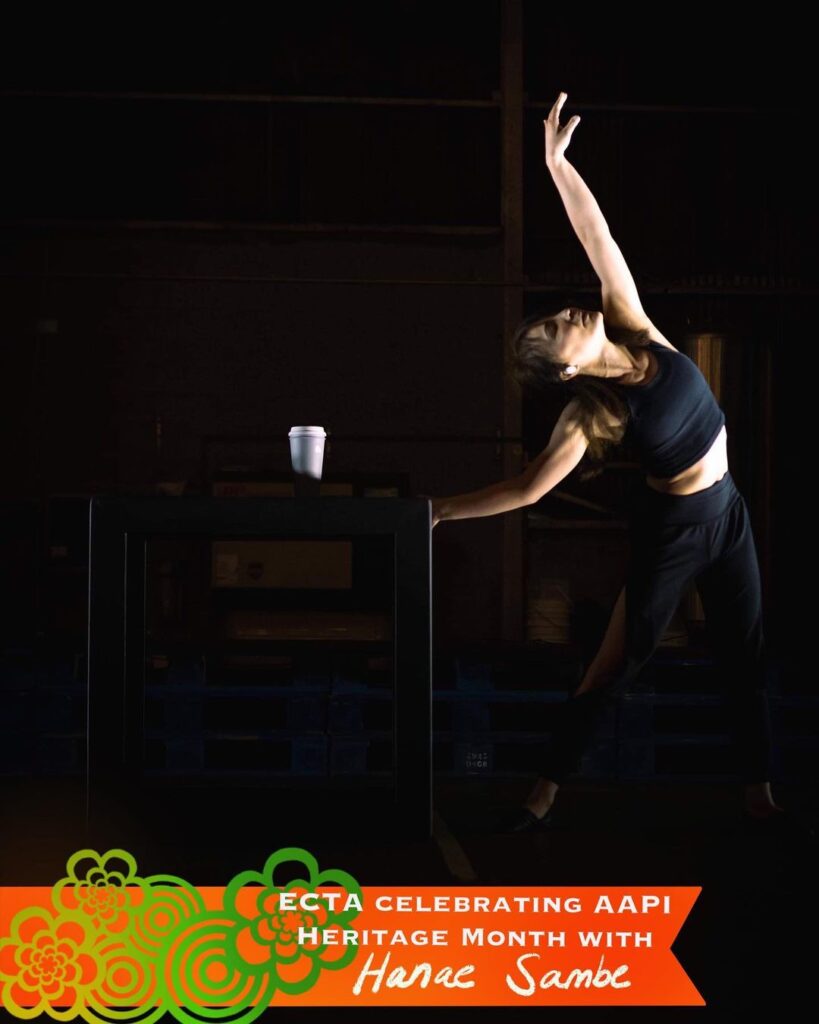 In middle school, I was introduced to “blind casting,” which is a hard conversation to have at that age. I was privileged enough to not understand why the color of my skin mattered at the time. Many years later, I became a part of the ECCA community. The thing that I’ve always loved the most is that we love raw talent. It doesn’t matter your race or any aspects of your body for that matter. We celebrate the art because that’s what matters most. 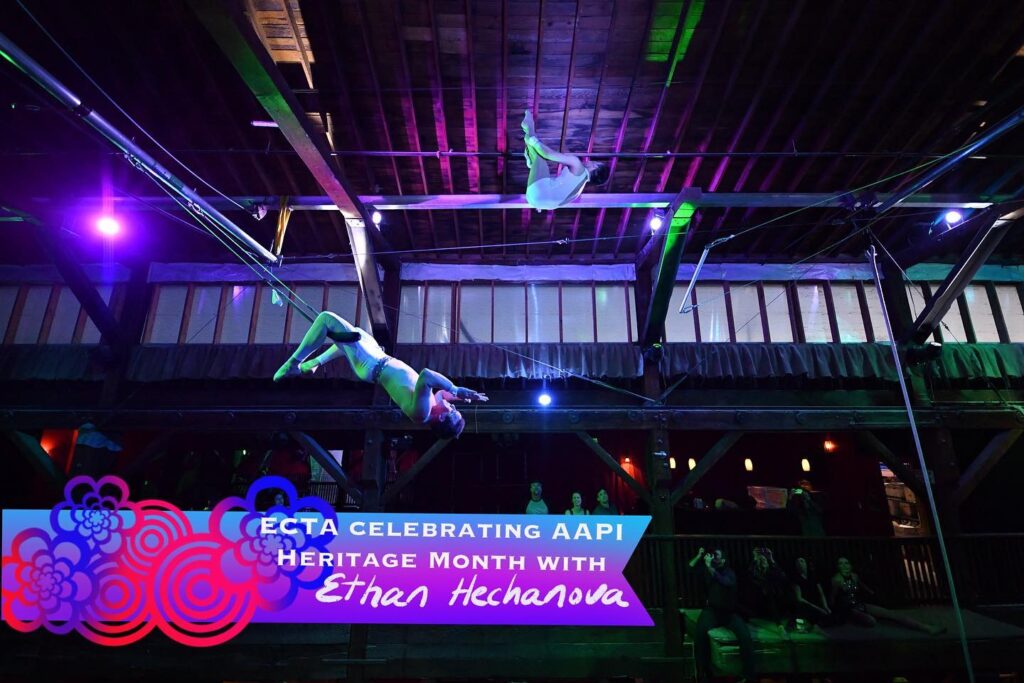 As an Asian American whose parents and grandparents were born in the US, I’ve always felt that I occupied a strange space in the world – on one hand, I was never fully Chinese, having “lost” a lot of the culture from my heritage. On the other side, to many in my community growing up in Texas, I was also not seen as being “American,” especially when the majority of my classmates were Caucasian Americans. Circus has upended these definitions and allowed me to feel more myself. From entering in the doors of the studio, I always felt like I was first considered an ‘artist’… and the first questions are always around what you do rather than what you look like. My ethnic heritage was only as important as I wanted it to be – and rather than having to choose between two forced identities of my ethnicity or my nationality, I was able to craft my own. I am so thankful to ECTA for supporting me in my own journey, and I am so excited to be a part of this special community that supports all people in building their own unique identity. 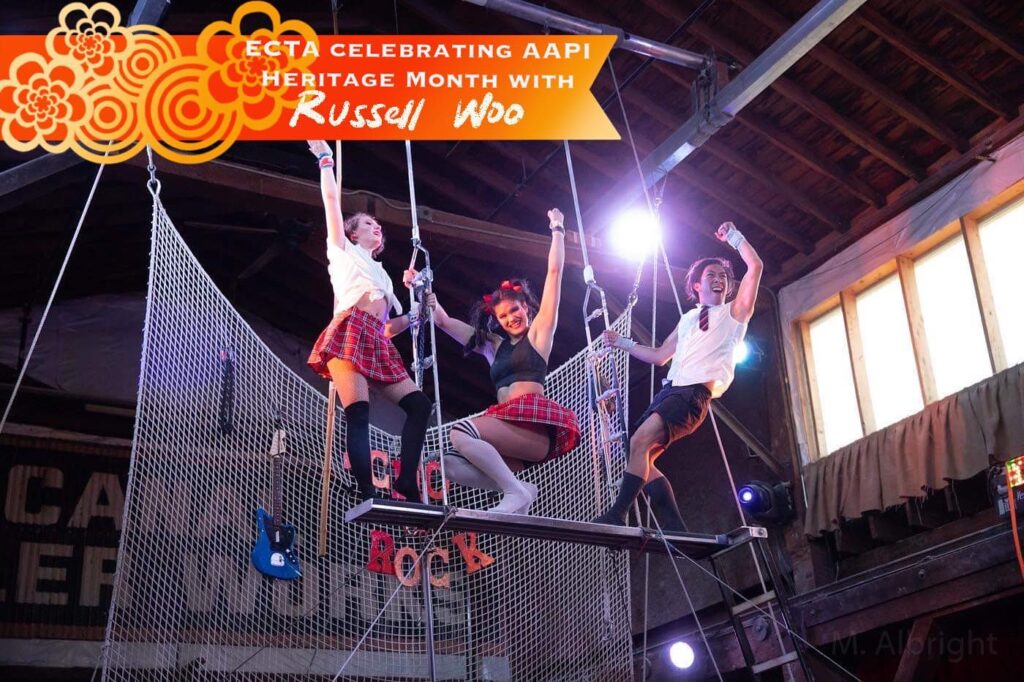 Where are you from? An easy question for some, but one that sparks serious anxiety for me. Are they asking about my Asian heritage or for an explanation of my accent? I’m Japanese. But I’ve never lived there before and I was born and raised in Malaysia, where I attended a British school and went to university in London hence the accent, but since I lived there I haven’t stopped moving! Math and sciences, the only way forward is to be a doctor or an engineer. So my answer to that? – Go completely rogue and be a flying trapeze artist. As a third culture kid, having a home away from home is so important, so thank you ECTA for giving me just that.

Representation really does matter and I am so grateful to Kevin (@cirque.pour.vu) for this celebration of AAPI month. I grew up in a town in the midwest where there was very little diversity. Children tend to imagine based on who they see around them. When you don’t see people who look like you in certain roles it is harder to accept and get others to accept, that you can be in that world. Circus is a place for dreams and I hope to keep seeing more and more diversity in the performing and teaching community.
Photo credit: @sanderlingphotography 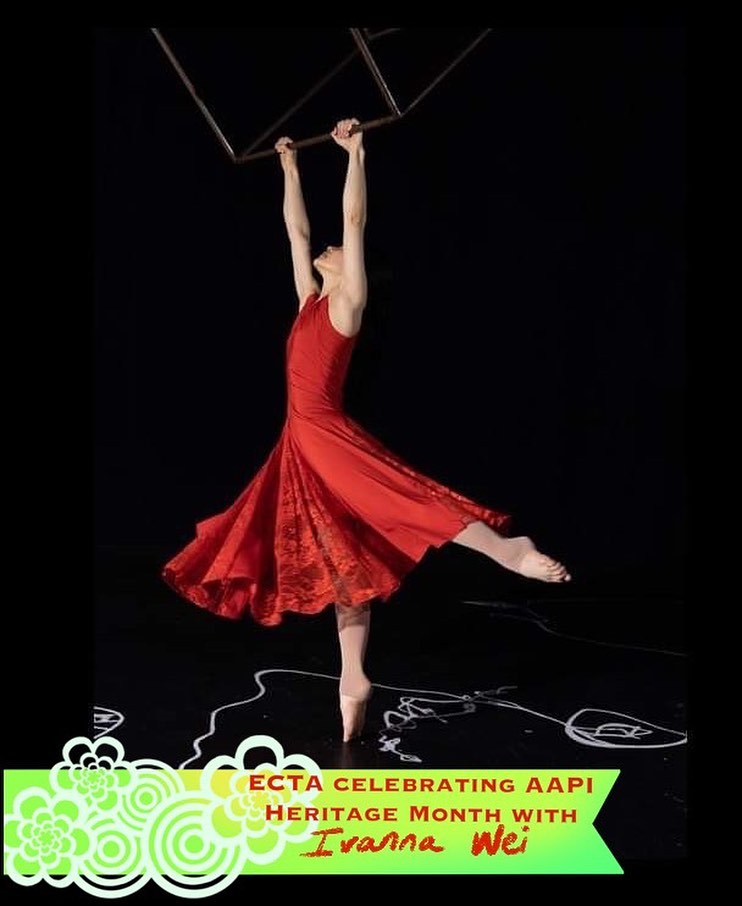