Featured in on Fox 13 – Seattle

With more places reopening and restrictions being lifted, there more places to go with the family. FOX 13’s Chynna Greene tries the trapeze at Emerald City Trapeze. 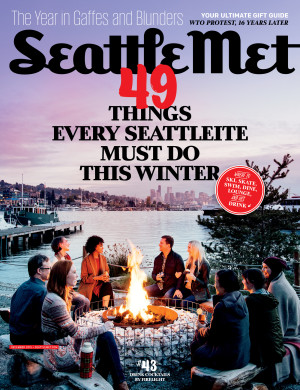 Top 49 Things Every Seattleite Must Do

“Kari Kirkland is living the dream: She ran away to join the circus. And within a year of ascending the ropes at SoDo’s Emerald City Trapeze for the first time, she married the owner and became a vocal evangelist. Now she insists that anyone can attempt a trapeze catch on their very first lesson—a two-hour affair that spends just 20 minutes on the ground. The school is housed in a former Seattle foundry and factory with a soaring wood ceiling and cozy fireplace lounge, plus trampolines and hanging hoops and the requisite very, very big net.”

The Day I Joined the Circus!

“Never in all my days on Earth did I think these 100-year-old song lyrics would apply to my life, but a couple of weeks ago I was doing just that: flying through the air on a flying trapeze. The “greatest of ease” part is still up for debate.” 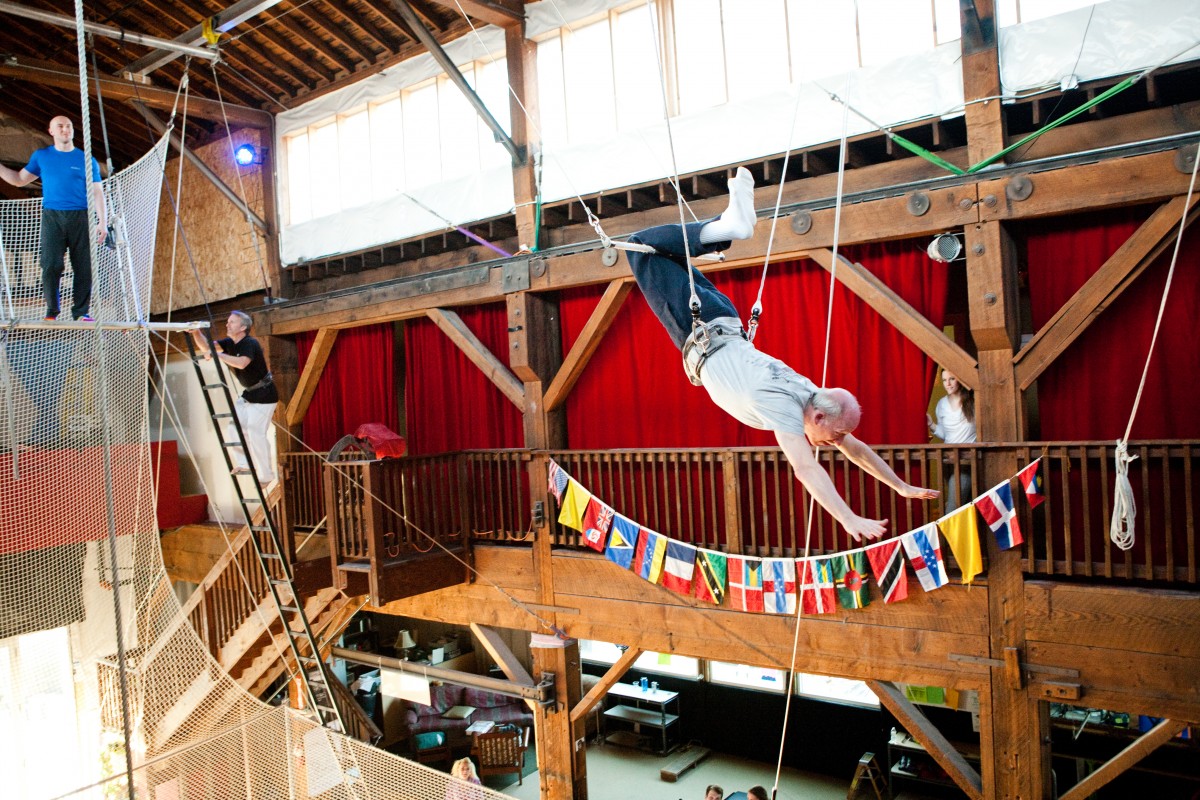 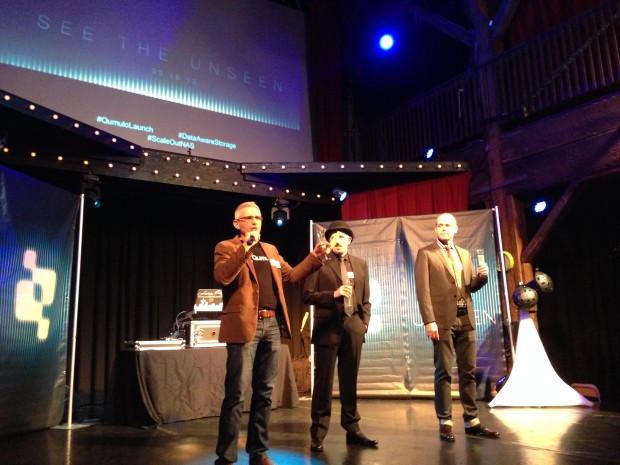 Trapeze artists and stilts: Check out the scene at this startup’s high-flying launch party

“We got a taste of that Monday night as the company — led by former Isilon veterans and backed to the tune of $67 million — hosted a lavish launch party at Emerald City Trapeze. Yes, there were high-flying acts, and even some performance artists on stilts delivering appetizers to guests. A fancy dessert bar get bellies full, while the signature cocktails were flowing.“

“Emerald City Trapeze Arts is a world-renown flying trapeze and aerial arts theater and school, and one of the nation’s most unique venues for weddings, birthdays, bachelorette parties, and corporate events. TLC has recognized Emerald City Trapeze Arts as a truly incredible and unique wedding venue by featuring it on the popular show, Four Weddings.” Read the full review here!

Looking for more information on hosting your wedding with Emerald City Trapeze? Learn more about our venue rental packages! 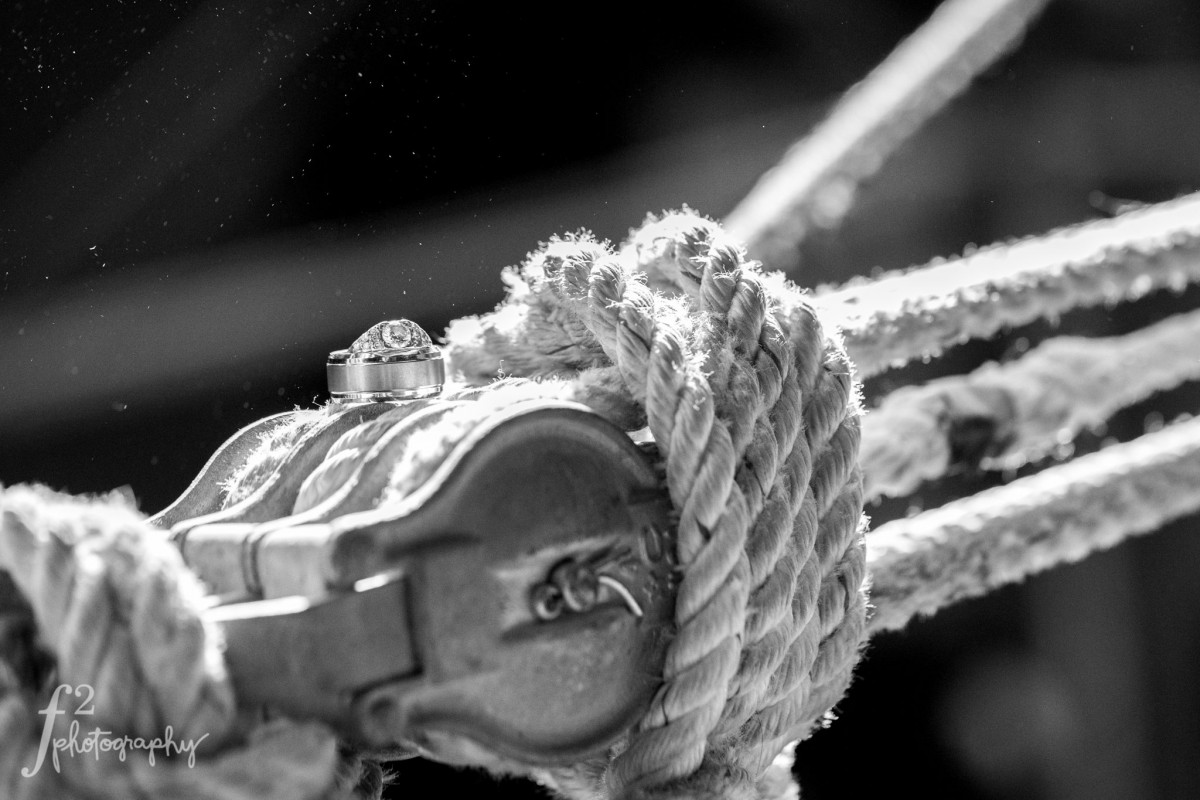 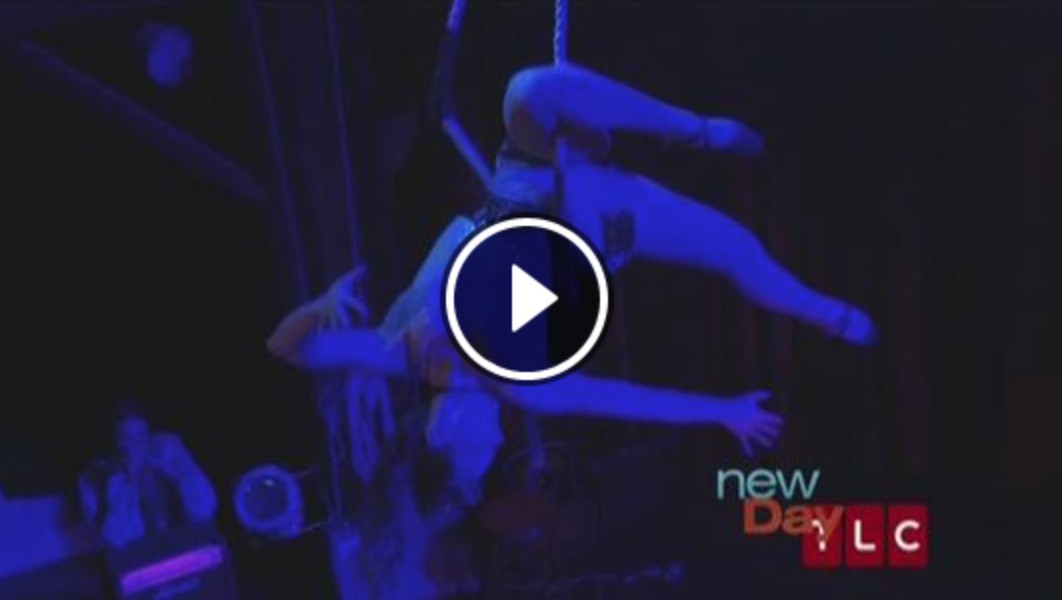 “The fifth season of TLC’s reality competition show “Four Weddings” premiered this past weekend. Season five kicked off with a brand new batch of brides ready to attend – and judge – each other’s weddings in the hopes of winning the ultimate, luxury honeymoon package. Featured in the show’s 100th episode season premiere was a Seattle couple who literally took their nuptials to great heights. Kari and Gary Kirkland joined host Margaret Larson on the show today to talk about their unique wedding and what it was like to compete on the show. You can catch back-to-back episodes of “Four Weddings” every Friday starting at 9pm on TLC.“

Here’s video proof!! Fitz & Ellen Tailor were flying high on the trapeze today! Major props to Ellen who conquered her fear of heights to try it. AND Fitz looks like he’s found his new calling! 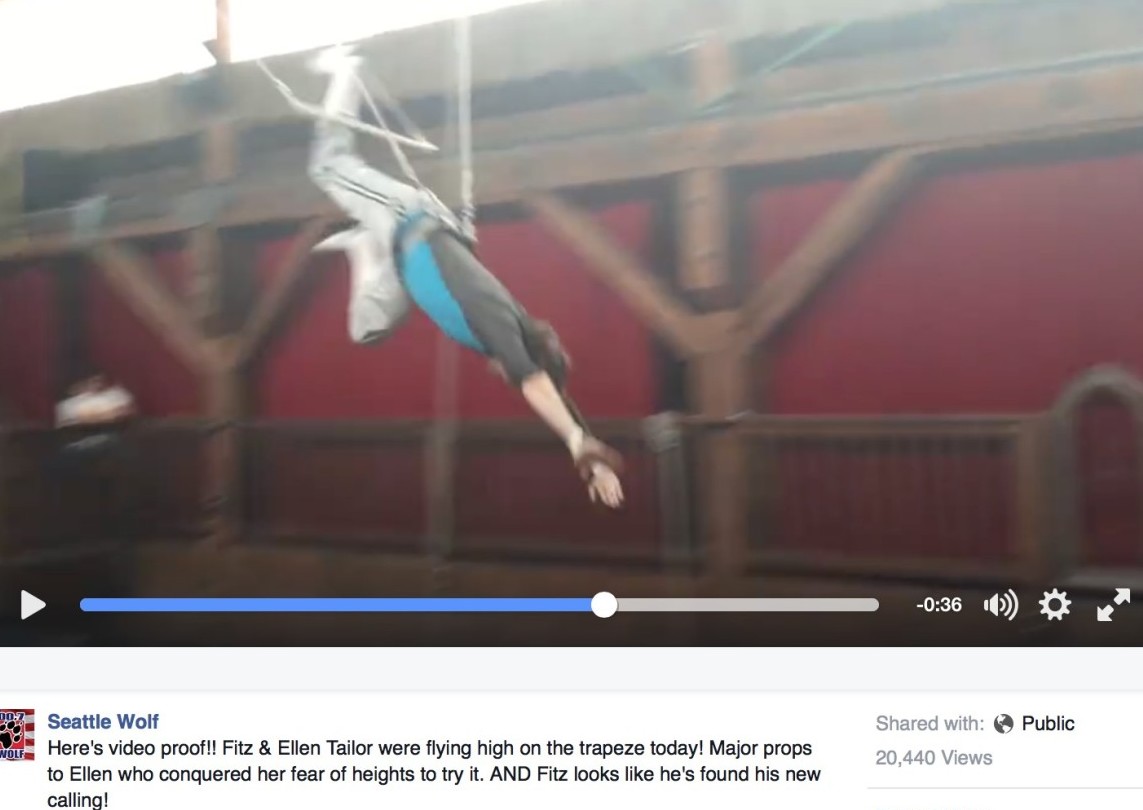 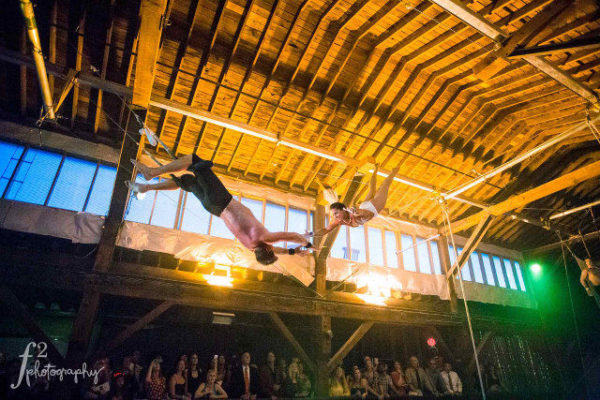 Emerald City Trapeze has worked with numerous companies, showing employees what goes into building strong trust and communication. When you start your class, the instructors begin with a 15-minute introduction to go over your first trick and safety standards. Then it is your time to learn to fly. Maybe you would prefer something a little different? Looking for a fun way to surprise your colleagues? It wouldn’t be the first time Emerald City has seen a CEO learn the flying trapeze only to show off their skills to a room full of their employees.

Fitness in the Sky: The Art of Trapeze

“If exercise is monotonous, then summer is the time to reinvent the mundane. Being active should invigorate the soul and challenge the mind. Occasionally, the body needs something new and exciting to quash the frustrations of everyday life. The art of the flying trapeze could be exactly what you need.“ 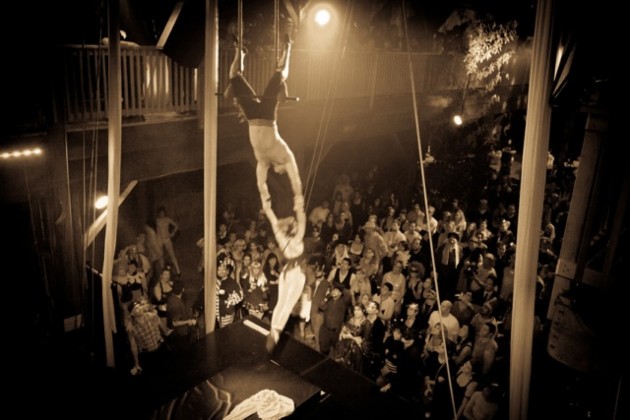 “SEATTLE – They fly through the air with the greatest of ease at Seattle’s Emerald City Trapeze, the site of a DareDever viewer challenge.

Trapeze student Stephanie Busch challenged me to take a blindfolded leap of faith. It took a team to get this dare off the ground.

I had just a few days to prepare for my blindfolded date with destiny, and I was struggling just to learn the basics. Major mess-ups resulted in what they called the “monkey stamp,” an inky blot on the back of the hand meant to remind the recipient of essential lessons learned.”

“Their ceremony and reception took place at one of the most unique wedding venues I have ever worked at, Emerald City Trapeze. Their grand entrance was straight out of a boxing match and the Karaoke Kings played their reception, allowing guests to get up on stage and rock out with the band.”

Check out all of the beautiful photos by reading the full article! 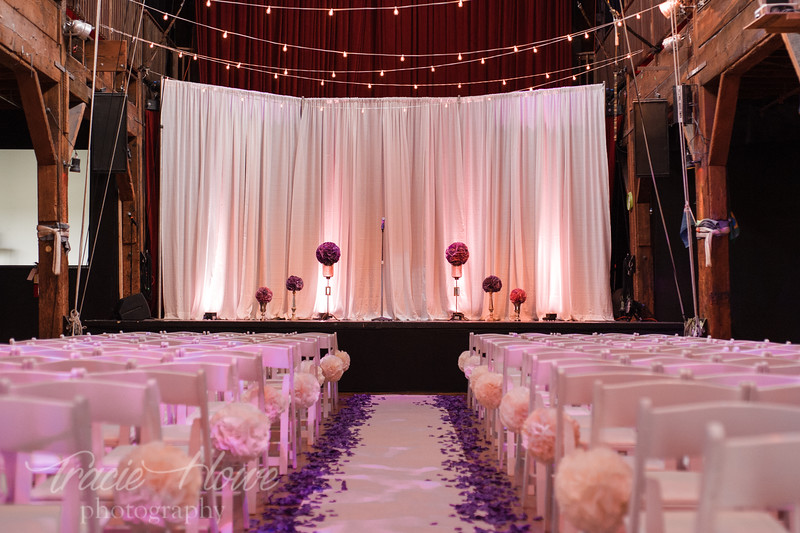 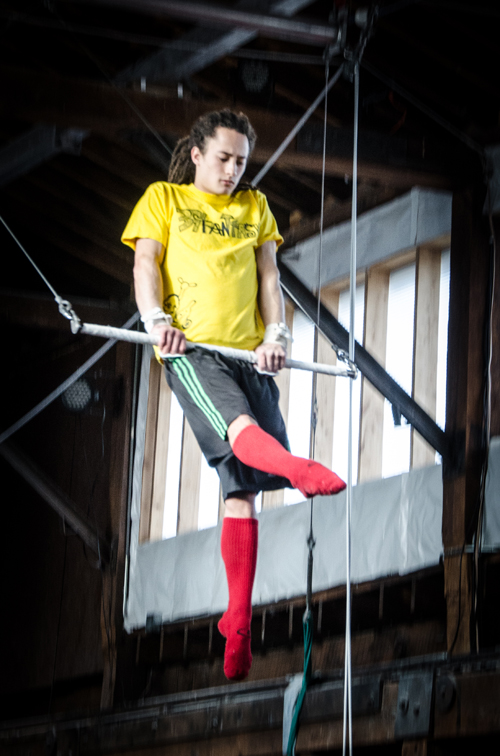 Rising Star on the Flying Trapeze

“Fear is a big part of flying trapeze,” says Jordan Tribble. “To stand up on the platform, with no safety lines, and tell yourself to jump off. Just swinging on the bar is a big deal.” For all of his talk of fear, at age 21, Christopher Jordan Yasukuni Tribble is a rising star on the flying trapeze. These days, he performs and teaches classes at Emerald City Trapeze Arts, a school in Seattle that offers classes in a variety of circus skills.” Read the story here!

Episode 5 – Fear and the Flying Trapeze

Featured by Northwester in 2015

Day Job is a Podcast about how artists pay the rent. Emerald City Trapeze Arts was featured during an interview podcast of Kari Kirkland. “Whatever happens up here, I’ve got you. Don’t worry, I’ve got you. Do you feel my knuckles in your back? Do you feel my hand around you? Do you feel that? You don’t have to think anymore. Just listen. All you have to do is listen. I will take care of the rest.” Ready to listen? 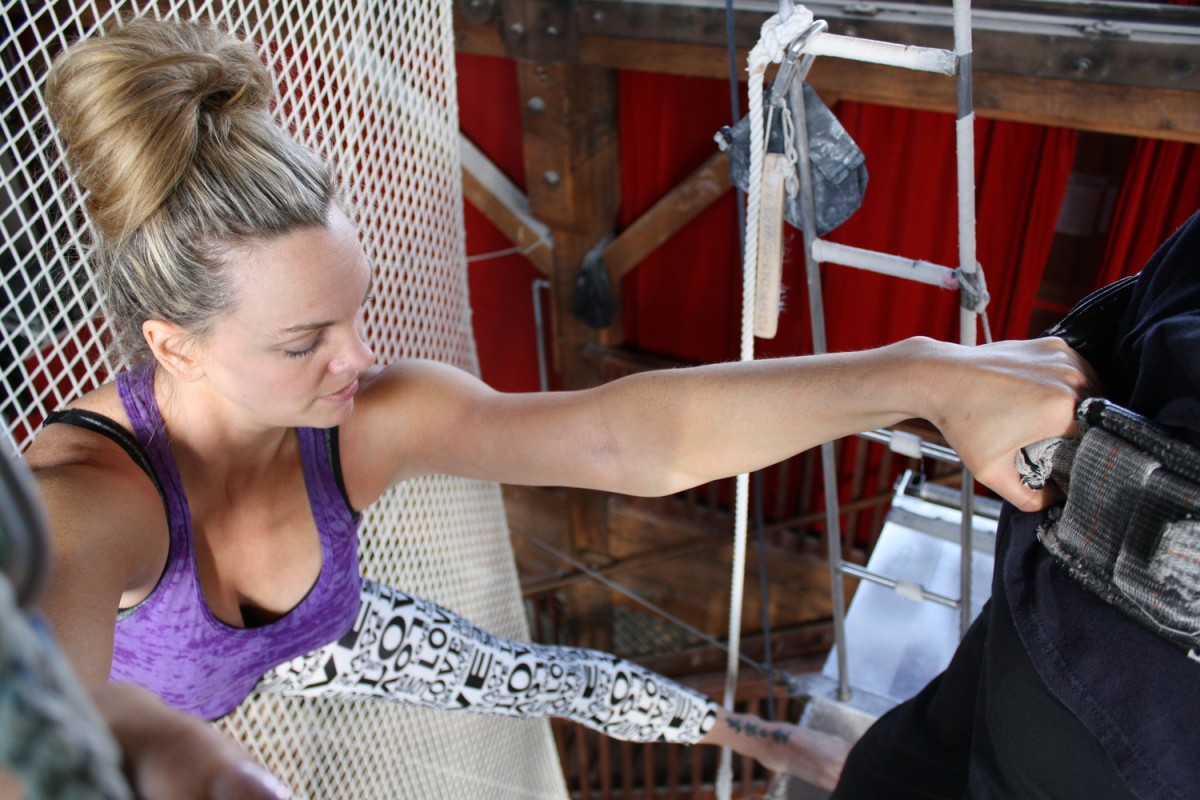 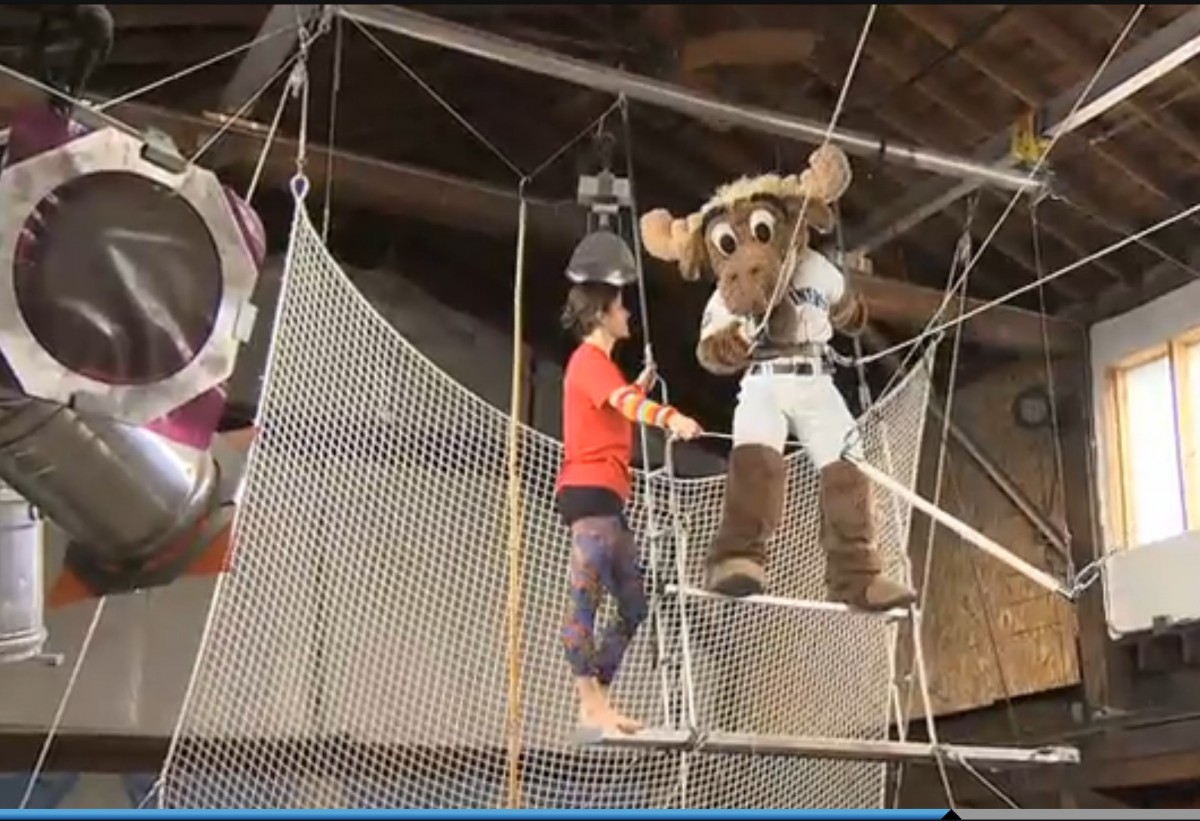 Mariner Moose on the Flying Trapeze

The team at NBC Deportes joined us at Emerald City Trapeze for a tour and class! Check out the link to watch the video!

“NBC Deportes is the programming division of the NBC Sports Group, owned by the NBCUniversal Television Group division of NBCUniversal, that is responsible for the production of sports events and magazine programs that air on NBCUniversal’s Spanish language television networks Telemundoand NBC Universo.” 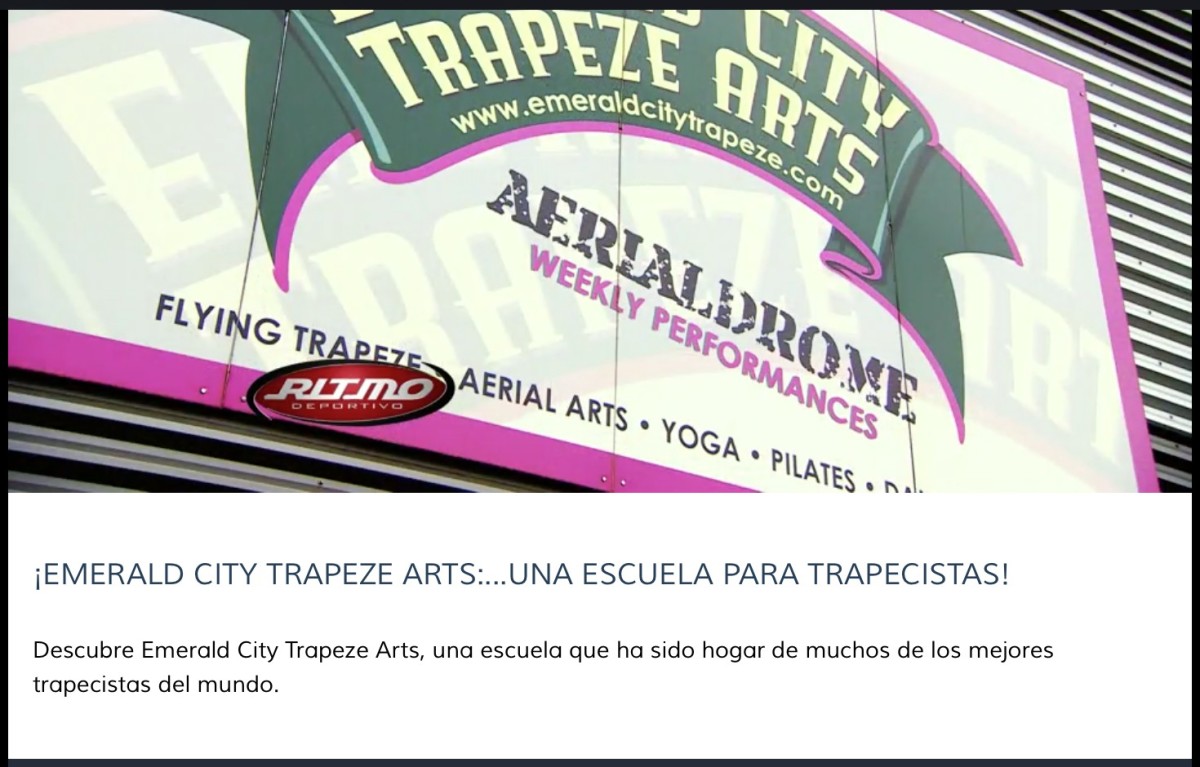 Featured on the Traveling Aerialist

“I have done my fair share of aerial arts, tumbling, and air travel, but never in my life have I felt as close to flying as I did last week at Emerald City Trapeze Arts in Seattle. I was told that I would never forget my first time flying, and that couldn’t be more true.”

Swing and a Prayer – Seattle Met

Whether it was adrenaline, an unconscious acceptance of the inevitable, or the fear of wussing out in front of the cute instructor who was waiting up there to—I’m just guessing here—toss me overboard if I couldn’t do it myself, I cowboyed up. Stepped to the edge of the platform, hooked my toes over the edge, and gripped the bar when she handed it to me. Bent my knees when she called out, “Ready,” and jumped when she barked, “Hep!” 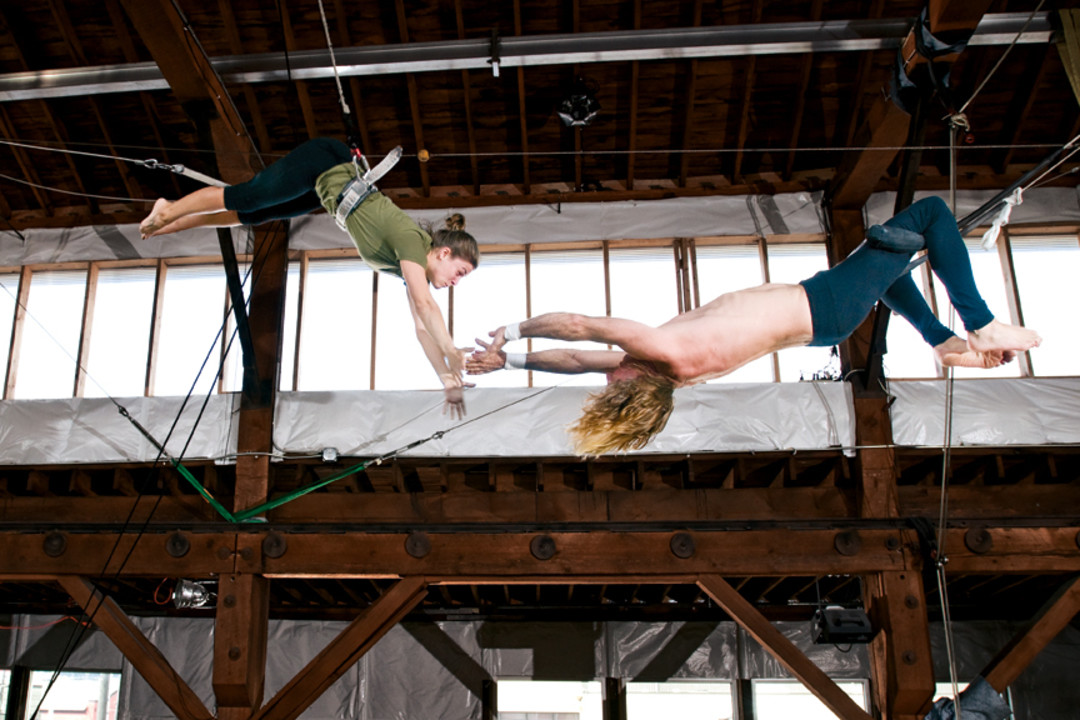 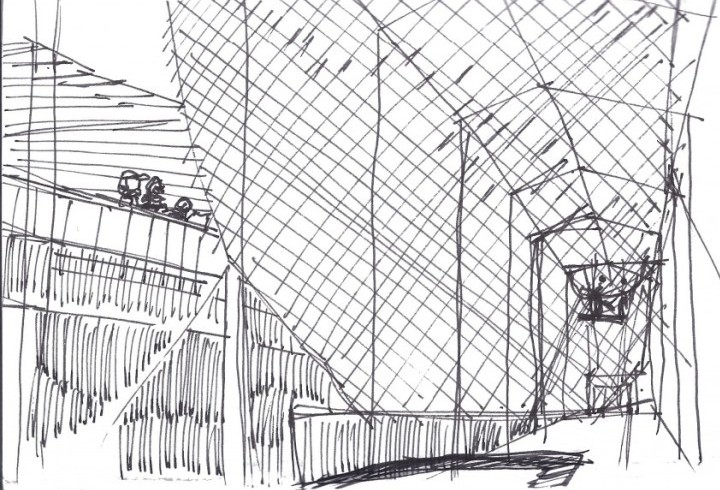 “The circus is always in town on Seattle’s Sixth Avenue. The Emerald City Trapeze Artshosts classes for adults and children in the aerial arts, including trapeze, rope work, gymnastics and more. They also hold shows in which teachers and advanced students entertain revelers. The result is a hidden carnival world with in the emerald city.

I recently had the pleasure of visiting this school with the Seattle Urban Sketchers and drawing the space. While I tried to capture some of the students in flight, my best sketches captured a single detail while suggesting or blurring out the plethora of action in the space. This was no easy task given the school’s eclectic collection and hectic atmosphere.

The school is located in Seattle’s Sodo neighborhood. Seattle’s industrial district, Sodo has a gritty charm during the weekend when the area closes down. You can be the only driver on the area’s wide boulevards, eerily similar to a scene from the Walking Dead. This disconnect lends an other-worldly feel to the school, as if it were hidden away with in the city.”

Take a Swing at Trapeze

“The flying-trapeze instructors at Emerald City Trapeze Arts have heard it all. They are kind and tolerant if you babble about how scared you are; they may even distract you with funny stories. But when it’s your turn, they are all business. They get you into position and cheerfully shout, “Ready, and hep!”

In other words, jump.

People who have taken a trapeze class are contagious in their enthusiasm, which is how I got roped in. Trapeze is remarkably accessible — body awareness helps, but you don’t have to be fit to do it. As long as you are older than 6, weigh less than 250 pounds, and skip the liquid courage before you head to class, you, too, can fly.” 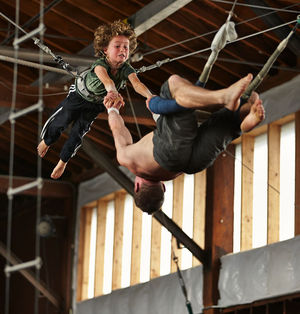 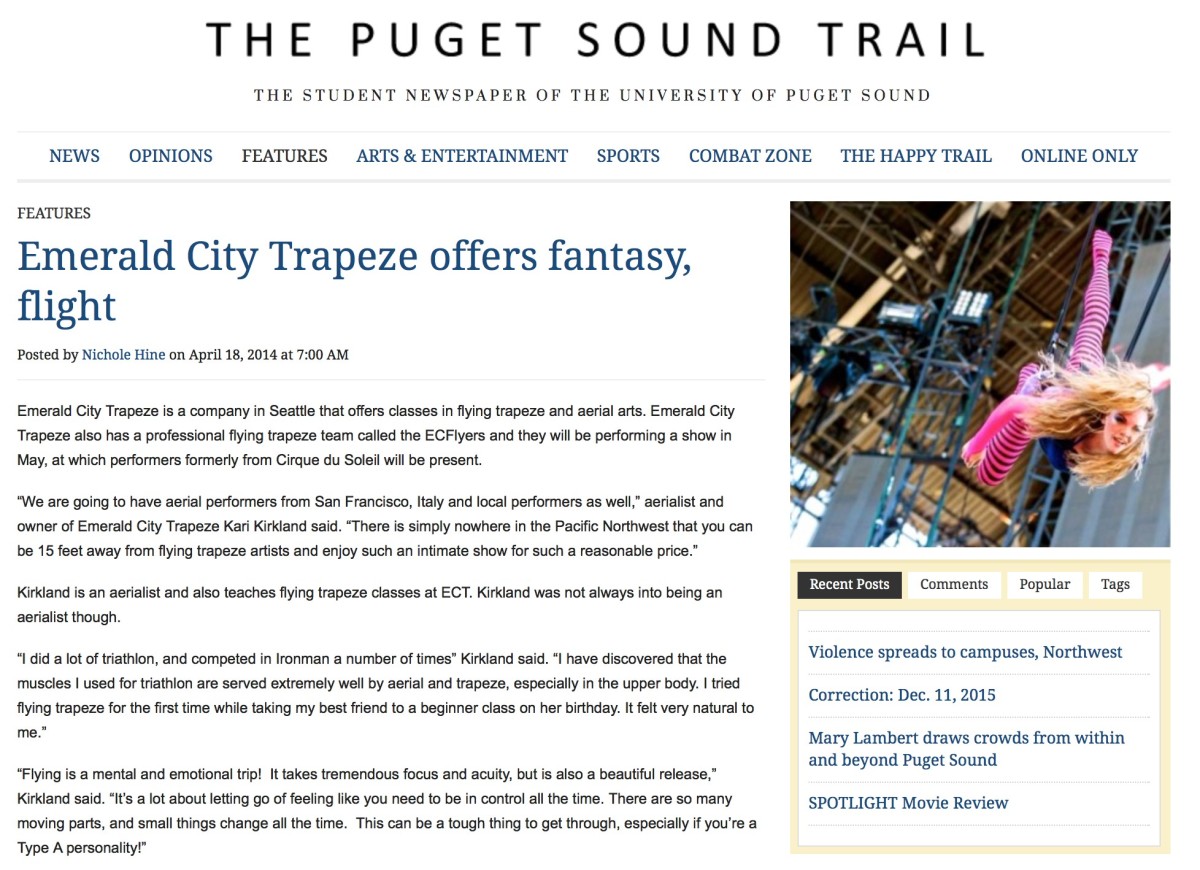 Featured by The Puget Sound Trail

“We are going to have aerial performers from San Francisco, Italy and local performers as well,” aerialist and owner of Emerald City Trapeze Kari Kirkland said. “There is simply nowhere in the Pacific Northwest that you can be 15 feet away from flying trapeze artists and enjoy such an intimate show for such a reasonable price.”

Kirkland is an aerialist and also teaches flying trapeze classes at ECT. Kirkland was not always into being an aerialist though.“